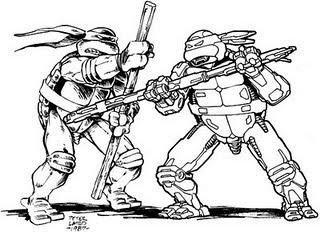 Note: Please email me for a full listing of figures, vehicles, accessories and character profiles from Hasbro's original lineup.

Another strong memory I have of him is discussing life in somewhat of a sophisticated manor for two neighborhood hooligans. We were swinging sticks at each others heads on my front lawn (around the corner from his house) and we were comparing our various martial arts training. At the time Ralph (his cousin) had taught him a few things and I knew a little Kung Fu from a summer camp that I went to.

We also spent many hours throwing screwdrivers and an axe into a tree in front of the house that he grew up in. We got pretty good after a while and could easily kill you.

On any given weeknight I could walk into The Apologist's house to find his mother cooking a late dinner and there would always be an invitation for me to join the family at the dinner table. It's not hard to smell the chicken frying in the pan or picture his mother getting ready for work as The Apologist stirred the rice. Obviously, his sister was there too. She was either singing, dancing or doing homework. Both of them used to babysit me when The Apologist's parents would go out. Does it really matter that I was a few years older than them and that the Apologist's mother actually paid me a couple of times.

After dinner on most nights his mother would have The Apologist pull her car into the driveway from the street (see ridiculous laws concerning vehicles parked in the street after 2:00 AM in Livingston, New Jersey). Before he pulled the car in The Apologist would take his mom's car for a spin around the neighborhood.

I rode shotgun quite a few times with the nine year old driver, and I'm pretty sure I had my first panic attack when he decided to take me on a complete tour of the state of New Jersey. I can't remember the make or model, but the thing was a three and a half cylinder shitbox that probably had 300,000 miles on it. It must have been a Toyota or a Honda.

My fondest memory of the car is a trip to Dorney Park. How the car made it I'll never know. It was The Apologist, his mother, his sister, Captain Corky, The Birdman and about thirty other kids. I think The Apologist drove.

As some of you know I started practicing Tae Kwon Do in 1983. At that time the Apologist was doing a host of activities which include practicing the violin, playing the piano, serving wafers and wine as an altar boy, playing chess, learning the electric guitar, and kicking a  soccer ball, and I'm sure he had a couple of tutors as well. But we didn't care! We both wanted him to start practicing. At first his mother was reluctant, but I remember The Apologist and I finally convincing her to let him join Tae Kwon Do one night in their kitchen. She laughed at our begging and desperate attempts to persuade her at first, but after a while she must have gotten tired of listening to our shit and that's whey she finally handed him a check for his first three months.

Don't tell anyone, but I made a 10 percent commission on every kid I ever got to sign his soul over to the Kwan.

I could go on forever... I remember the passes I threw to him at Hillside Elementary School, the diving catches on Hazel Ave, fires built in blizzards at Dinosaur Park, the snow shoveling, the roll playing games, the fort, the action figures and most fondly, the never ending game of Captain Corky and the Apologist vs Evil.

We played that game until the last one of us was forced to see that we were too old to play.

When we were young The Apologist told me things that I was too young to completely understand about verbal and physical abuse. I always knew there was truth to what he was telling me and later I witnessed it with my own eyes and ears...

I had my own demons called abandonment and abuse that were buried deep down inside and I'm sure that's part of what drew us to each other. Sick fucks like each other.


As we got older the game changed but it was always Captain Corky and The Apologist vs. the world.

Everywhere I went I took him until he was old enough to start taking me. From Summer camp, to Redbank, NJ, to the falls, to the dinner, to partys in the woods, to jobs as telemarketers, to camp outs on mountain tops in western, NJ, trips to Washington, DC and Western Maryland etc. The list is endless, but the core cast of characters in these adventures are always the same.

Later we both moved to DC and that's where our game was at it's best and worst. Those stories deserve their own posts and will continue to get them, but when we were on, nothing could stop us. Don't forget, Captain Corky and The Apologist are pretty handy with a screwdriver.

I've seen the Apologist do things that would amaze you. Some of it would probably scare the hell out of you too. I've followed his trail of blood on more than one occasion...

After years of wrestling with the good, the bad, and the ugly, The Apologist started taking care of himself through some serious soul searching.

His accomplishments to this day make me proud. He graduated from an Ivy League School and then got his law degree from another prestigious school and never once made me feel less than his equal. But then again he does not have my distinguished record of attending four county colleges in three different states. I've been eyeballing a potential fourth in Indiana.

Today the Apologist is married to an amazing woman who is even smarter than Captain Corky and The Apologist put together. I'm pretty sure his wife never drove a motorcycle into a barbwire fence after drinking a bottle of vodka, for example. She's obviously more caring and thoughtful too.

They have the most beautiful son who receives lots of love, positive thoughts, and prayer, but needs more. 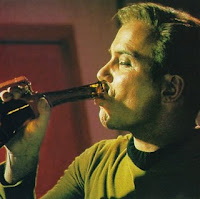 So while The Apologist and his wife are busy taking care of their son, working insane hours, sleeping four hours a night, practicing the violin, playing the piano, eating wafers at alter-people practice, playing chess, strumming air guitars, kicking soccer balls, co-hosting Passover Seders, eating Korean food or shoving hot dogs down their throats on the 4th of July, I hope they know that Captain Corky is standing at attention ready to whisk them away, because here at Corky's log The Game Never Ends. That's what this place is about when I'm not busy defending Peyton Manning's honor as the greatest Quarterback to ever play the game.