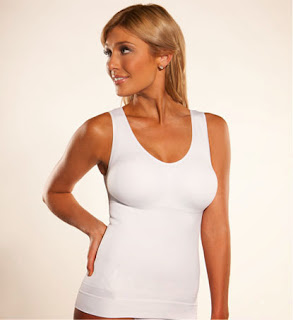 I just watched a commercial for the Genie Cami Shaper  (on the NFL Network). According to the commercial, this shit hides and folds all sorts of sin. It makes fat disappear like magic!

I've seen the commercial a few times now and I just marvel at way Cami Shaper transforms a dumpy woman into a brick shit house right in the blink of an eye.

For 60 bucks it's not a bad deal. To sweeten the pot they throw in a few other colors, like black and skin.

I'm pretty much sold other than the fact that I'm a guy.

Now if Genie comes up with a nylon girdle for guys I'm definitely  interested, but for 60 dollars not only do I want mine to nip and tuck, but it better be bullet proof and augment my strength by at least 10 times. I'm cool with white and black, but prefer a charcoal gray more so than a skin.
Posted by captain corky at 5:33 AM